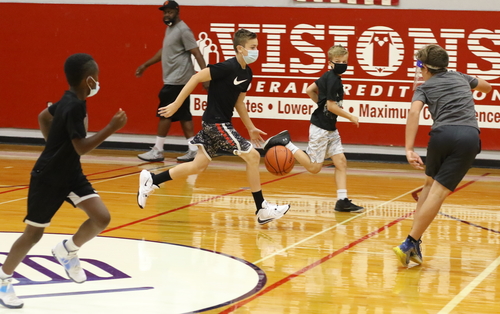 BINGHAMTON — It’s not as easy as it has been in the past, but the Southern Tier Hawks will host a three-day "Black Friday" camp — Nov. 27-29 — for two age groups here at St. Mary’s Rec. Center.

Hawkins said the camp will follow all the state-mandated Covid-19 protocols.

“It makes it very difficult,” said Hawkins. “Everything has to be charted, there are temperature checks, we’re limited to the number of kids we can have in a certain area, and there’s a limited number of people allowed in the gym.

“It’s effected the way we do things big-time,” he added.

So why does Hawkins want to run the camp?

“It’s my passion, my passion for the kids,” he said. “It’s what I’ve been doing for 17 years. My outlook on life is to help kids through life using sports. They need this.”

Hawkins and the Hawks are also providing high school players with an opportunity to become involved with the program, and Waverly senior Ryan Lambert has taken full advantage.

“Ryan has been at most of our workouts and practices, and has met every challenge head on,” said Hawks founder Keith Thomas.

“When Reggie hasn’t been available, Ryan has stepped up and taken charge,” he added. “He’s been a very valuable asset to the program. We could not be prouder of him.”

The Southern Tier Hawks organization has its sights set on growth.

“We’re in the process of forming another boys AAU team, possibly two, as well as a girls team,” said Hawkins. “We have the 12U boys team, we want to start a 14U boys team, and a 14U or 15U girls team.

“As an organization we’d like to keep adding teams, and try to get more kids involved moving forward,” noted Hawkins.

“We’re also looking to do more clinics and camps,” he added.

“We’re just starting to work with fourth- fifth, and sixth-graders on Saturday mornings,’ said Hawkins. “It’s the first time I’ve worked with that age group in some time.

“We’re getting a big buzz on it because the younger kids don’t have any type of outlet at all,” he noted. “I’m really focusing on that.

“We did one little Saturday morning run with it, and we had 10 kids,” continued Hawkins. “It went well. I got a lot of requests for more, so I’m sure it will grow.

“We’re in the process of getting that running regularly very, very soon,” he added.

There’s likely to be even more kids included in the near future.

“We’d like to get kids from kindergarten through third grade involved as well,” said Thomas.

“With the training sessions, conditioning sessions, workshops, and our teams, we have well over 100 kids involved in the program right now,” noted Thomas. “The program has grown since Day 1.”

“We’re also looking to develop an in-house travel team with athletes ranging from fourth- to sixth-grade,” added Thomas. “All of the game would be played locally.”